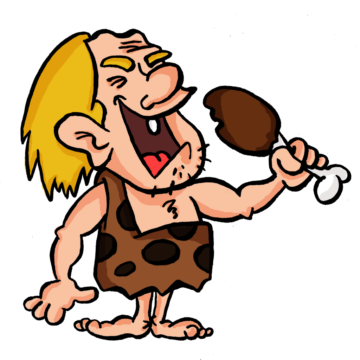 Well, it’s hard to say because there is little archeological evidence left to examine, but the remains that have been discovered have shown little to no cancer rates. We do have first-hand records and reports of hunter-gatherer societies who ate and lived like cavemen though, and there still are several societies who continue to eat and live like cavemen, so we can make some assumptions from them.

These societies ate similar diets as our caveman ancestors, hunting and gathering their food, and consumed hefty amounts of fat and protein with leafy vegetables and berries.

J.A. Urquhart, a physician who practiced medicine in Northern Canada in the early 1900’s, reported on the health of the Inuit people (aka Eskimos). These hunter-gatherers still followed a diet and lifestyle similar to what would be expected of our caveman ancestors, with 65-100% of their diet was made up of fat and protein from wild animals, fish, and whale blubber.

Dr. Urquhart practiced medicine with the same equipment as his contemporaries in the first world, wich allowed him the ability to diagnose cancer with an accuracy comparable to first world doctors. Yet, when describing his encounter with cancer in the Eskimo people he reports: “First, as regards cancer, I have not in my seven years’ experience in the north seen a single case of malignancy in either Eskimo or Indian. It has been suggested to me that perhaps I have not met enough of the older, cancer-age people, or that perhaps the natives do not come to the hospitals as readily as in other parts of Canada.To this, I may reply that my practice takes in amongst the tribes very intimately, and I frequently have to live in their campments while making my patrols among them. I, therefore, meet all types and ages. As for the hospitals, the natives appreciate them to the utmost and use them freely. It is for someone else to explain this absence of cancer amongst these people.”

Another doctor, F. P. Fouché, who was a missionary surgeon stationed in Africa, was quoted in the British Medical Journal in 1923: “For six and a half years I was District Surgeon in the Orange Free State. The district in which I practiced had a native population of 14,000, the large majority of the Basuto race. During the whole of that period, I never saw a single case of gastric or duodenal ulcer, colitis, appendicitis, or cancer in any form, in a native, although these diseases were frequently seen amongst the white or European population.”

It is important to note that European populations living in the same areas were being diagnosed with cancer. Also, records have shown similar lifespans between the natives as the English and other “civilized” cultures, therefore it was not just a matter of the Europeans living longer to get cancer. Interestingly, Dr. Fouché later discussed his encounter with an African woman who had adopted a Westernized lifestyle in South Africa, and undoubtedly ate a “civilized” diet including sugar and grains: “Whilst, however, acting as locumtenent for a colleague in the Western Province of South Africa, I saw two cases of carcinoma of the breast in native women. They both belonged to the coloured race peculiar to that part, a race which has lived under civilized conditions for the last 300 years at least.”

Dr. Weston Price uncovered many insights on cancer, tooth decay, and many other diseases, through his travels around to the world, visiting numerous “primitive” societies and examining their peoples. He found that these societies never brushed, yet had straight, white, healthy teeth, with little to no cavities. He also found cancer, heart disease, diabetes and obesity to be virtually non-existent. These people didn’t even know what those illnesses were. They died from old age, or accidents and infections due to cuts or broken bones, but not the diseases we have in our modern world.

The bottom line is the valuable lesson we can learn from these societies and our ancient ancestors: When we take sugar and processed food out of our diet and replace it with real nutrient-dense food and stay active, we don’t suffer from the common “civilized” diseases either. It’s actually quite simple, but due to our addiction to modern foods and our “sit and work” culture, it can be difficult without the right tools and motivation.

And that’s why Beege and Peege are here – to help you with that!

A Holistic Approach to Cancer