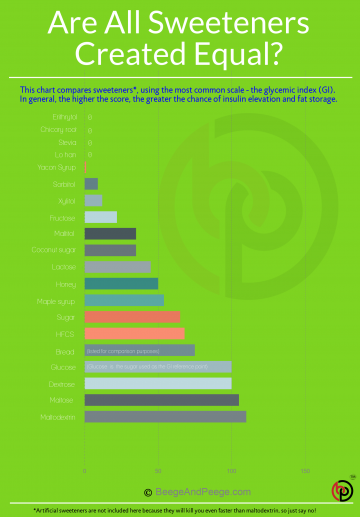 You have probably heard that eating sugar can raise insulin levels. You may have also heard that insulin is the hormone most responsible for turning on your fat-storing switch. This makes insulin the “bad guy” hormone when it comes to gaining fat, or finding it hard to lose fat.

Insulin isn’t alone though. Lots of other chemicals and hormones contribute to fat gain and storage – like cortisol for instance – but for the purposes of this post, we will keep it to the story of insulin.

It is true that sugar can raise your insulin levels. You can see that in the chart pictured here with different sweeteners listed (click it to enlarge). The most common culprit on this chart is, of course, sugar, which rates a 65 on the glycemic index (GI) scale, compared to glucose – the gold standard – which rates at 100.

This appears to suggest that if glucose raises your blood sugar a certain amount, sugar will raise it about 65% of that amount. Or is that actually true?

It really depends on the amount you eat. That’s where the glycemic index vs. glycemic load comes in.

You might have to eat a whole loaf of almond meal bread to elevate your blood sugar as much as one slice of white bread because, at that point, the glycemic load is the same.

No matter what you are eating, when blood sugar elevates past a certain level, insulin follows because that’s the hormone responsible for telling your cells to take in nutrients, in order to get that sugar out of your bloodstream so it doesn’t go too high causing a diabetic coma, or worse – death.

A high glycemic load meal is the best way to spike your insulin. One teaspoon of sugar (4 grams) probably won’t do it, but a 12-ounce cola, with 39 grams of sugar probably will. And now you’re in fat-storing mode and out of fat-burning mode, even though that cola was “fat free.” Welcome to fat-free fattening foods and the road to diabetes type II…

Sugar and starch (which is turned into sugar shortly after eating) aren’t the only culprits that cause blood sugar spikes and resulting insulin spikes. Even the mere anticipation of food can cause a blood sugar elevation. It won’t ever be a spike, but it can certainly be significant.

Stress can also cause a blood sugar spike because the liver will kick out a bunch of sugar to help give you some quick energy to deal with that stress. Heck, even a high-intensity workout can cause blood sugar elevation for the same reason in some people.

These spikes are rarely high enough to cause an insulin spike, but if your blood sugar is elevated already from one of these situations, and then you eat some sugar on top of that, it won’t take much to get you to the point where you are high enough to get that dreaded insulin spike.

Overeating can also cause an insulin spike, even if the foods aren’t high GI or meal isn’t a high glycemic load. The digestive system sees that binge and knows it needs to send all that food to storage, so it will spike your insulin even if your blood sugar isn’t spiked. Now you are in the dreaded fat-storing mode, even as a low carb eater or keto person!

Eating lots of protein can also spike your insulin. Even though that three pound porterhouse is free of charge, plus your picture on the restaurant wall if you can finish it, your digestive system is panicking about what to do with all that hard-to-digest meat and the response will be an insulin spike. Welcome to fat-storing, even though you just ate zero carbs!

Fat is the safest macronutrient when it comes to insulin spikes though. It takes a lot of fat to spike your insulin, but it’s still possible, so any food can do it if you overeat enough and it’s actually less than you probably think. It’s for this reason that I recommend my hunger scale brain training technique. If you stop eating when you are at a 3-4 (on a scale of 0-10, with 10 being the fullest), you won’t cause any insulin spikes from overeating protein or fat. But remember it takes surprisingly little sugar and starch to spike that insulin!

Sugar and starch are carbs, but not all carbs are created equal. There are “fast” carbs like sugar and “slow” carbs like broccoli and “no impact” carbs like fiber. Fast carbs have a fast effect on blood sugar and have a higher GI. Slow carbs have a slower effect an are lower GI. No impact carbs have no effect, but any of these carbs can cause an insulin spike if overeaten enough.

It’s also important to know that carbs are not an essential nutrient. We don’t actually NEED carbs. Protein and fat, however, are essential. You will die without them. If you went cold-turkey zero carb, your liver would make enough for the needs of your body. That’s why carbs aren’t essential. Your body can make them and it knows just how much you need.

I’m not saying go zero carb by any means. I am low carb, but not zero carb. I love my veggies and would find it very difficult to go zero carb. I’m just saying it’s possible – even to THRIVE on a zero carb diet. Just ask the ancient Eskimos. They did it 9 months out of every year, for thousands of years, eating mostly fat and meat, with no heart disease, no diabetes, no cancer, enjoying very long and healthy lives.

Bottom line: Insulin spikes cause you to get fatter and make it harder to burn fat. Sugar, starches and “fast” carbs are the usual suspects when it comes to causing insulin spikes, but overeating can also do it, so I eat low carb and use the hunger scale to prevent overeating. This keeps my insulin levels down and my fat-burning mode turned on. This also keeps my pancreas from working too hard and wearing out sooner than it should. God designed the pancreas with a lifetime warranty, but chronic overeating and high-carb diets can void that warranty so be careful and eat right!